Join us for an opening art reception for Chad Hoberer. Meet the artist, view his works and enjoy a night out at the Museum of Visual Materials.
Wine & cheese available.
Friday, May 4th from 6-8pm.
Admission is free.

Chad’s work will be exhibited in the Main Gallery May -June.

Learn more about the artist:

Chad Hoberer is a Dallas based artist who has been painting for more than half his life. Chad has over twenty years of professional experience as an artist, painter and designer. A foundation laid during his one on one training with Benedictine monks at Subiaco Academy where he attended boarding school in his early teens. He earned his BFA in Animation and began his career as an animator, but soon moved on to follow his love of painting.

Beginning with the Peter Wolf Shop in his late teens, through his late twenties, Chad received old world scenic training from some of Dallas’s most talented artists. The training he received there shaped both his professional artist skill and business management skills.  Chad has since worked as a Production Designer, Art Director, and Scenic lead. He is recognized as one of the most well respected names in the industry.  Chad now owns and operates a Dallas scenic company, C. Scenic, in which he oversees the creative team, runs the paint department and manages projects. All while still dedicated time to his personal studio, where he feels most comfortable.

Chad is far from an average painter in the art world. He is a creative force, someone who still has a deep-rooted child-like imagination. Seeing whole scenes of beautiful wonder in the foundational, texture layers, that often begin his process. He is drawn to the chaotic beauty of nature, and reflects this in his work.  Chad at times, builds entire series of paintings based on the imagined ideas of strange creatures, phobias, childhood memories, or even, beautiful things he saw while traveling. Every painting has a story, however getting Chad to share is not an easy task. 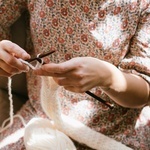 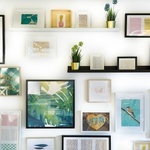 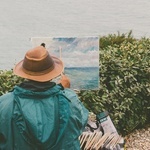